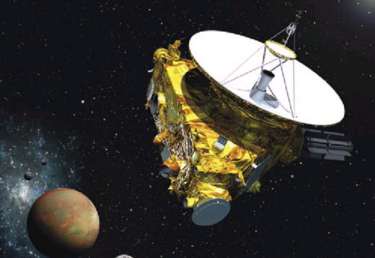 Pluto was discovered in 1930 and demoted to a dwarf planet in 2006.  But in all that time, we knew next to nothing of its appearance.  NASA’s historic mission to Pluto culminated with the first flight past the distant dwarf planet on July 14, 2015.  New Horizon’s pictures of Pluto and its moons showed surprising surface complexity.  Hear about this journey through the eyes of the mission operations team and some challenges of piloting the small robotic spacecraft through the solar system for nearly a decade – such as planning for (and dealing with) long-distance technical hiccups. Ms. Bowman’s team itself was part of history, operating a spacecraft that had to travel longer and farther than any mission ever to reach its main target.

Alice Bowman is a member of the Principal Professional Staff at the Johns Hopkins University Applied Physics Laboratory in Laurel, where she leads the Space Mission Operations Group and serves as Mission Operations Manager (MOM) for NASA’s New Horizons mission. Ms. Bowman supervises approximately 40 staff members who operate deep-space and Earth-orbiting spacecraft.  As the New Horizons MOM, Ms. Bowman leads the team that commands and controls the spacecraft that made an historic close flyby of Pluto in July 2015 and continues deeper into the solar system’s distant Kuiper Belt region. Ms. Bowman’s experience also includes national defense space operations, systems engineering, program management, engineering management, space systems and space instrument development and deployment. Ms. Bowman earned a bachelor’s degree in physics and chemistry from the University of Virginia, Charlottesville.  She is a senior member of the American Institute of Aeronautics and Astronautics and has served on the International SpaceOps Committee since 2009.  As part of the New Horizons team, she has received a number of NASA Group Achievement Awards and the 2016 SpaceOps Award for Outstanding Achievement.

Directions: Breslin Hall is on the South Campus of Hofstra University in Hempstead. Take Meadowbrook Parkway Exit M4, west onto Hempstead Turnpike (Route 24).  After about 1 mile, turn left onto California Ave. opposite the North Campus entrance.   After ¼ mile, turn right into parking lot.  Breslin Hall is 0.1 mile ahead, the last building on the right.  For directions and campus map:  http://www.hofstra.edu/directions