We have been publishing the text of talks given by some of our Section’s members at the 160th Birthday of Nikola Tesla event of July 10, 2016 at the Tesla Science Center at Wardenclyffe in Shoreham. This month features the final talk, “Nickola Tesla: The Inspirational Force” presented by Davor Dokonal. Davor is the Editor of Pulse, the IEEE Long Island Section Secretary, the Chair of the Computer Society Chapter of Long Island and is actively improving and overseeing the development of our website. 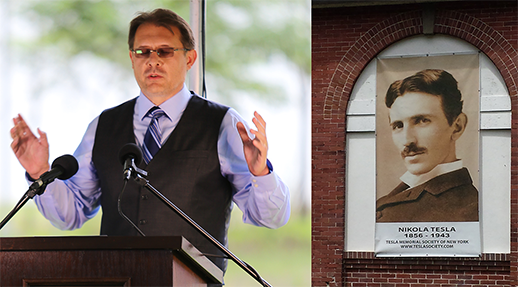 It’s a true honor to be here today and celebrate Nikola Tesla, his life, and his work.
As you know, Tesla is a unit used to measure the force of a magnetic field. Today, I’d like to talk about another force: Tesla as a force of inspiration.

Nikola Tesla was born 160 years ago in Smiljan, a small village in today’s Croatia. According to legend, nature played with giant sparks of electricity that night; a fitting start for someone well-remembered for playing with electric sparks himself. What is less acknowledged is his courage, his amazing ability to traverse distance, language and culture.

After finishing high school in Karlovac, he went to college in Graz, in modern-day Austria. Forced to leave when he could no longer afford tuition, he worked for a while in today’s Slovenia; and then moved back home to work as a teacher in Croatia.

Tesla was just 23 when he lost his father and left his home permanently to enroll at Prague University. Next, he moved to Budapest, where he worked on the first telecommunication exchange; and then to Paris, where he worked for the Continental Edison Company.

Tesla’s work at this time was already novel and promising, but he believed he could go further. He had lived and worked in six modern-day European countries before crossing the Atlantic in 1884, at the age of 28, and making history in the United States.
Tesla’s ardent desire to follow his work in pursuit of “advancements in technology for the benefit of humanity”, in the spirit of the IEEE, is invigorating.

Such a move must not have been easy. I know; I moved halfway around the world myself at a similar age. I can imagine how much harder it was to make that move alone, and over a century ago. I mean, just consider the different cultural priorities today: I was told we are streaming live in Belgrade right now; they are probably watching the live stream of the Euro football final on the 2nd screen.
Tesla’s ardent desire to follow his work in pursuit of “advancements in technology for the benefit of humanity”, in the spirit of the IEEE, is invigorating.

His life was always an inspiration for me, for we share quite a few similarities. I was born in the same country, studied electrical engineering; worked for a company that bears his name, just as he did; and worked on telecommunication exchanges. I too “worked with wireless technology that covers a great part of the Earth and allows us to communicate with one another instantly, irrespective of distance.” Today I work with smartphones, devices “that allow us to see and hear one another as perfectly as if we were face to face, despite intervening distances of thousands of miles.” – In these last two sentences, I’ve used Tesla’s own words, captured during an interview in 1926; 90 years ago. How is that for inspiration?

Tesla’s legacy is an astonishing number of inventions, and almost 300 patents worldwide. And I am certainly not the only one to have been inspired:

Larry Page, the founder of Google and CEO of Alphabet, read Tesla’s biography when he was 12. While it motivated him to do great things with technology, Page was also inspired by aspects in which Tesla failed; he vowed to have a more successful business and personal life.
Elon Musk, the CEO of Tesla Motors and Space X, not only named a company after Tesla, but pursues ventures that aim to allow us to harvest electricity and utilize it in more efficient ways.

Marin Soljačić, a Croatian physicist and a professor at MIT, is known for his work in wireless energy transfer. Like Tesla, Soljačić founded a company to commercialize the invention; the company’s CEO cited Tesla’s ideas for the wireless transfer of energy, including the Wardenclyffe tower, as their inspiration.

These are only select examples; there are countless more.

We are often inspired by ordinary people who do extraordinary things. We appreciate when someone has the ability and willingness to be selfless, creative, innovative, or just dares to be different.

Tesla certainly made many sacrifices. He dared to be different. Born in Croatia to a Serbian family, Tesla is a scientific hero and inspiration to both nations. The modern engineering community considers him as one of the greatest American inventors of all time. He was truly a citizen of the world. His work and life inspired technology, stories, theories, controversies, movies, and works of art. In fact, a statue of Tesla in Silicon Valley provides free Wi-Fi access to the community.

Nikola Tesla was and is an inspirational force. There are people like this today, amongst us. Some better known, some unknown. We all have the power to inspire.

We do it in various ways, providing others with the path, showing, mentoring, teaching. IEEE members often act as mentors to new generations of engineers.

So let me end this with a question:

Whom will you inspire next?
Thank you.