Attached are my thoughts about limiting gerrymandering in political districts. It is a mathematical means and should contribute to the ability to effectively limit this practice. I received no encouragement when I presented this to my congressman or senators, but I feel this approach should be encouraged by the engineering community. 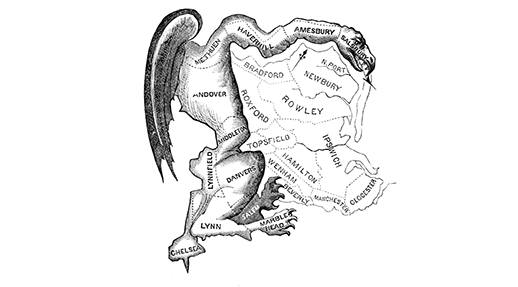 How do we prevent Gerrymanders from occurring? I have a suggestion that may not stop the process entirely, but will go a long way toward making the process much harder. I propose a rule that limits the perimeter of a district relative to its size. It is a dimensionless quantity, meaning that it does not matter what the size of the district the rule will limit its geometry. The rule is simple, it compares the perimeter, (P), squared divided by the area, (A). The rule is that this quantity must be less than 100. That is (P2/A < 100). This rule goes a long way toward inhibiting a Gerrymander from occurring.

The selection of the limit of 100 for P2/A is obviously arbitrary. There may be a different selection made for this number, but it should not be so high that it is meaningless. I would think a value of 150 would not be unreasonable but I would not go much above that. I took a look at the boundaries of counties within a state to arrive at the 100 number. I could not find a county within a state that had a ratio of greater than 100. My search was not exhaustive but I looked for irregular counties in a number of states and I could not find even one that exceeded 100. The counties are not decided by any political considerations and thus may be made to conform to the landscape.

My writing did not come out as I had hoped. Whenever you see a 2, except before a Π, it should be shown as superscript. It is on the original word file, but it did not come out when the file was transferred.